​Looking for an engaging speaker for your next book club, garden club, literary event or community group meeting? ​John is pleased to offer a variety of different speaking programs, free or at a minimal cost*:

* John does not charge an appearance fee, but he does request reimbursement for travel outside the Charlotte area.

About John B. Marek

John B. Marek is an award-winning author, speaker, and advocate whose work focuses on rural living and economic sustainability, alternative gardening, and outdoor adventure. He has published five books, including the best-selling Ben and the Art of Lawnmower Maintenance (Lulu Press, 2018) and the award-winning collection of short fiction The Bug Jar and Other Stories (Lulu Press, 2016). His work has appeared in local, regional and national publications including the Charlotte Business Journal, Statesville Living, Business North Carolina, N.C. Outdoors and Site Selection magazine and his weekly Field Notes column for the Speckled Paw blog offers a unique take on the rewards and challenges of rural life.

John grew up on the shores of Lake Erie near the town of Port Clinton, Ohio, graduated from Bowling Green State University with a degree in Business Administration, and settled in Northwest Ohio where he held management positions in the retail, technology and automotive industries from 1986 to 1994. His attempt to establish a self-reliant rural homestead during this period is the subject of his forthcoming book, The Little House on the Highway.

In 1995, opportunity called him south to the Charlotte, North Carolina, area where he has worked for the past two decades as an advisor to industry, local economic developer and statewide advocate for rural issues. In 2019, he received the Henry W. Little III Community Leadership Award for his efforts to revitalize the economy of rural Anson County, N.C. He currently lives in Huntersville, North Carolina and pursues his passions for writing, the outdoors and rural living along with his wife Janet and their rescue dogs Laika and Millie.​ 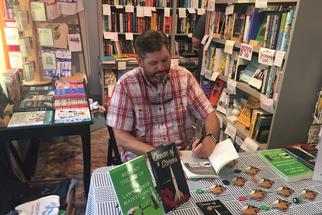